The Montana Learning Center and Carter County Museum partnered this summer to provide students in 8th to 12th grade an unforgettable learning experience as working paleontologists.

At Camp Clades & Spades, campers and staff from the Learning Center and the Carter County Museum spent two and a half days at an active dig site in the Pierre Shale Formation in Eastern Montana, excavating the tail end of a mosasaur — a 75 million-year-old predatory marine reptile of the late Cretaceous period that was an average of 30 to 50 feet in length. The mosasaur specimen the campers and staff worked on, known as “Vickie,” has at least 70 articulated vertebrae spanning 28 feet, with multiple pelvic elements and flipper bones. A short hike by the keen-eyed campers resulted in the discovery of ammonites (extinct marine mollusks closely related to octopuses and squid) and vertebrae and gastroliths (rocks inside a reptile’s gastrointestinal tract) from a plesiosaur (a Mesozoic marine reptile).

The first dig day consisted of carefully digging a trench around the mosasaur tail bones, while looking for fragments and other bone pieces in the dirt around the exposed vertebrae. On the second dig day, the trench was dug deeper to create a pedestal to make removing the bones easier and a plaster and burlap jacket was placed over the bones to keep them together during removal. In preparation for removal from the dig site, the last day was spent applying extra layers of plaster, burlap, and wooden bracings to support the enormous block containing the articulated tail.

Campers spent the last day and a half at the Carter County Museum, touring the Museum’s collections, sorting the material they collected in the field, and preparing the found fossils for display. Campers also arranged some of the found fossils and prepared informational placards with the assistance of Carter County Museum staff to create a new, permanent Montana Learning Center exhibit at the Museum. This exhibit will evolve from year to year as the collection of fossils discovered by campers grows. Fossil discoveries, which are being excavated on Bureau of Land Management administered land, will become part of the Carter County Museum collection with the campers who found the fossils listed as the collectors.

“The Learning Center is very excited about this new partnership with the Carter County Museum and Camp Clades & Spades, which offers students interested in paleontology the rare and exciting experience of excavating and preparing fossils for museum display,” said the Learning Center’s Executive Director, Ryan Hannahoe. Carter County Museum’s Museum Educator Steve Hobe expanded, saying, “Camp Clades and Spades provides a unique opportunity for campers to do real science and experience the entire process of paleontology, from discovery to display.”

To learn more about the Montana Learning Center and Camp Clades & Spades, visit the Center’s website at www.montanalearningcenter.org.

To learn more about the Carter County Museum, visit the Museum’s website at www.cartercountymuseum.org. 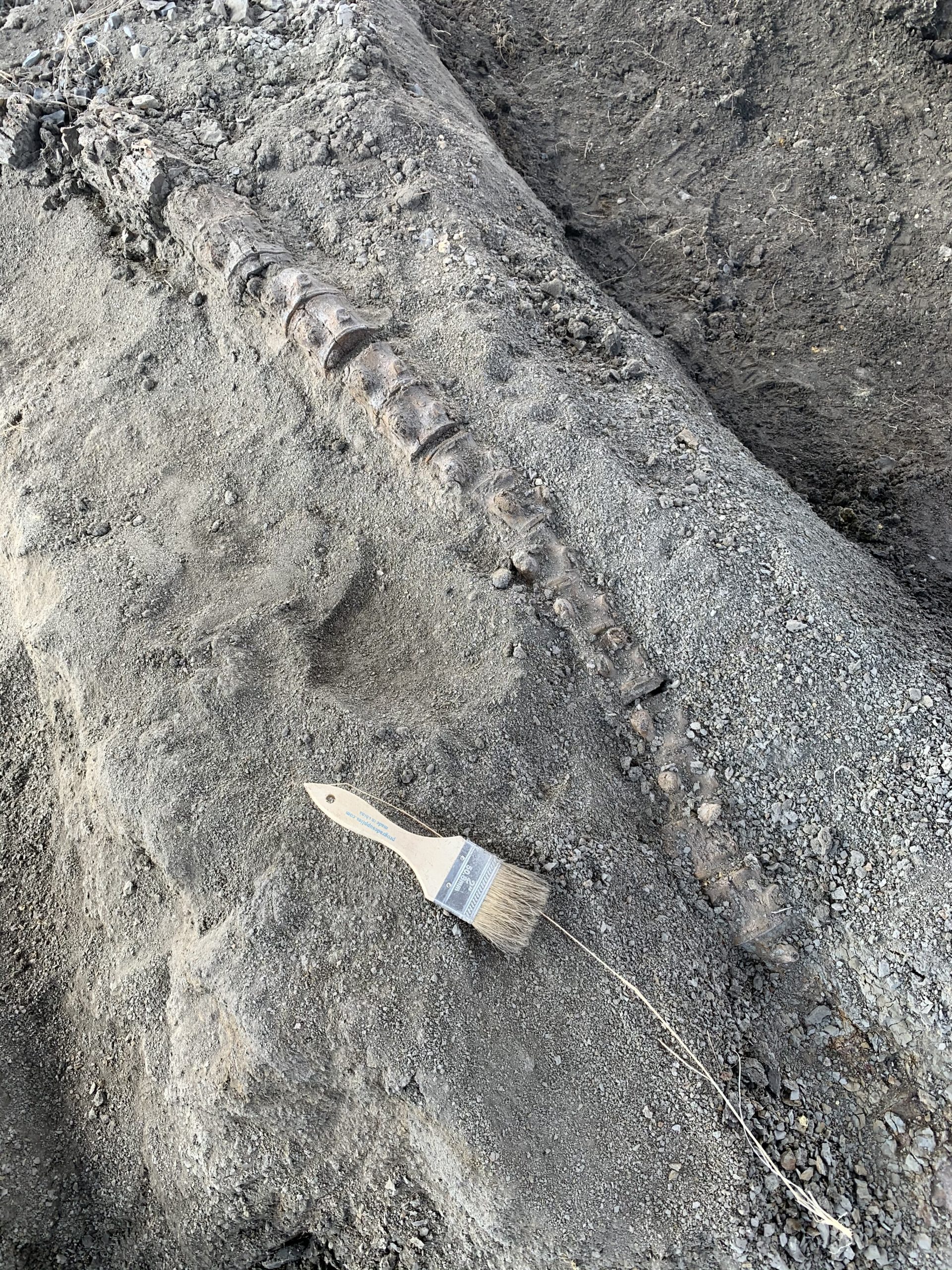 Campers worked to uncover this large section of a Mosasaur’s tail found in eastern Montana, as well as other portions of the estimated 45’ to 50′ marine reptile. 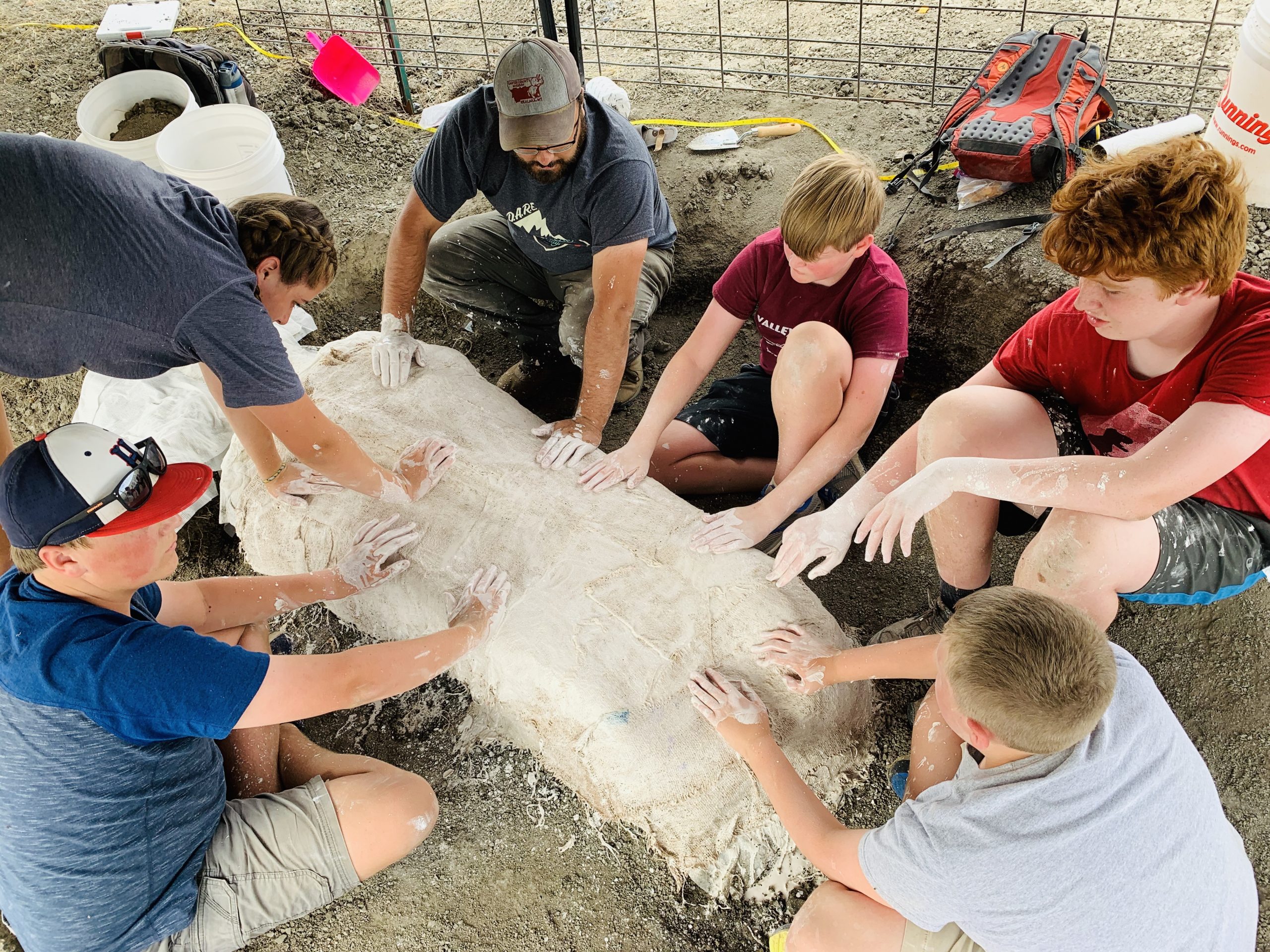 Campers jacketed a 4′ section of the Mosasaur tail in plaster and burlap for transport. 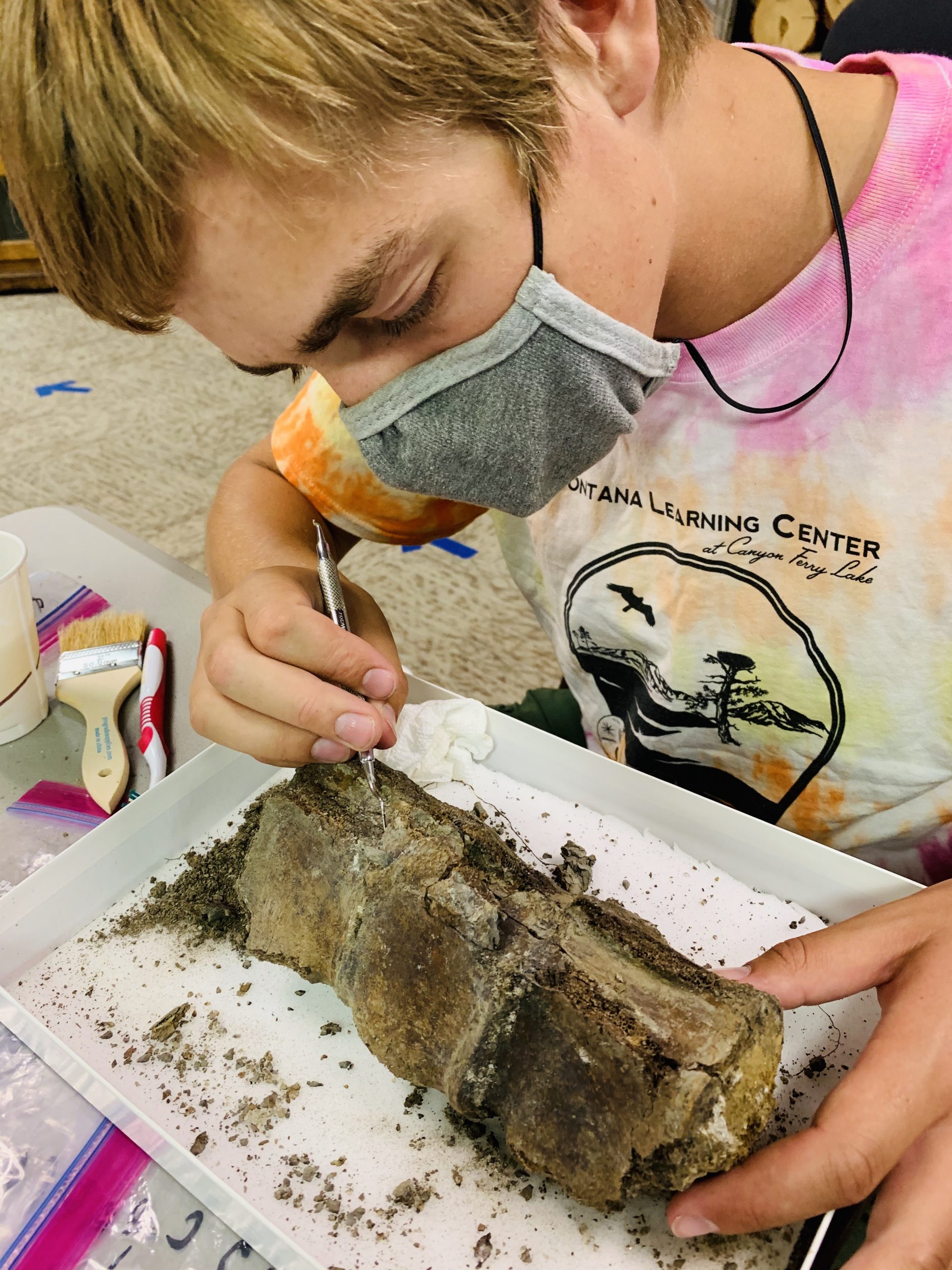 Montana Learning Center Junior Counselor Heath Caldwell cleaned and prepared a section of the Mosasaur‘s vertebrae for display at the Carter County Museum in Ekalaka.